I've created an easy to use R script that will import your data, and performs and writes up a state-of-the-art dependent or independent t-test. The goal of this script is to examine whether more researcher-centered statistical tools (i.e., a one-click analysis script that checks normality assumptions, calculates effect sizes and their confidence intervals, creates good figures, calculates Bayesian and robust statistics, and writes the results section) increases the use of novel statistical procedures. Download the script here: https://github.com/Lakens/Perfect-t-test. For comments, suggestions, or errors, e-mail me at D.Lakens@tue.nl. The script will likely be updated - check back for updates or follow me @Lakens to be notified of updates.


Correctly comparing two groups is remarkably challenging. When performing a t-test researchers rarely manage to follow all recommendations that statisticians have made over the years. Where statisticians update their recommendations, statistical textbooks often do not. Even though reporting effect sizes and their confidence intervals has been recommended for decades (e.g., Cohen, 1990), statistical software (e.g., SPSS 22) often does not provide these statistics. Progress is slow, and Sharpe (2013) points to a lack of awareness, a lack of time, a lack of easily usable software, and a lack of education as some of the main reasons for the resistance to adopting statistical innovations.

Here, I propose a way to speed up the widespread adoption of the state-of-the-art statistical techniques by providing researchers with an easy to use script in free statistical software (R) that will perform and report all statistical analyses, practically with a single button press. The script (Lakens, 2015, available at https://github.com/Lakens/Perfect-t-test) follows state-of-the-art recommendations (see below), creates plots of the data, and writes the results section, including a minimally required interpretation of the statistical results.

Automated analyses might strike readers as a bad idea because it facilitates mindless statistics. Having performed statistics mindlessly for most of my professional career, I sincerely doubt access to this script would have reduced my level of understanding. If anything, reading an automatically generated results section of your own data that includes statistics you are not accustomed to calculate or report is likely to make you think more about the usefulness of these statistics, not less. However, the goal of this script is not to educate people. The main goal is to get researchers to perform and report the analyses they should, and make this as efficient as possible.


Keselman, Othman, Wilcox, and Fradette (2004) proposed the a more robust two-sample t-test that provides better Type 1 error control in situations of variance heterogeneity and nonnormality, but their recommendations have not been widely implemented. Researchers might in general be unsure whether it is necessary to change the statistical tests they use to analyze and report comparisons between groups. As Wilcox, Granger, and Clark (2013, p. 29) remark: “All indications are that generally, the safest way of knowing whether a more modern method makes a practical difference is to actually try it.” Making sure conclusions based on multiple statistical approaches converge is an excellent way to gain confidence in your statistical inferences. This R script calculates traditional Frequentist statistics, Bayesian statistics, and robust statistics, using both a hypothesis testing as an estimation approach, to invite researchers to examine their data from different perspectives.

Since Frequentist and Bayesian statistics are based on assumptions of equal variances and normally distributed data, the R script provides boxplots and histograms with kernel density plots overlaid with a normal distribution curve to check for outliers and normality. Kernel density plots are a non-parametric technique to visualize the distribution of a continuous variable. They are similar to a histogram, but less dependent on the specific choice of bins used when creating a histogram. The graphs plot both the normal distribution, as the kernel density function, making it easier to visually check whether the data is normally distributed or not. Q-Q plots are provided as an additional check for normality.

Yap and Sim (2011) show that no single test for normality will perform optimally for all possible distributions. They conclude (p. 2153): “If the distribution is symmetric with low kurtosis values (i.e. symmetric short-tailed distribution), then the D'Agostino-Pearson and Shapiro-Wilkes tests have good power. For symmetric distribution with high sample kurtosis (symmetric long-tailed), the researcher can use the JB, Shapiro-Wilkes, or Anderson-Darling test." All four normality tests are provided in the R script. Levene’s test for the equality of variances is provided, although for independent t-tests, Welch’s t-test (which does not require equal variances) is provided by default, following recommendations by Ruxton (2006). A short explanation accompanies all plots and assumption checks to help researchers to interpret the results.

The script also creates graphs that, for example, visualize the distribution of the datapoints, and provide both within as between confidence intervals: 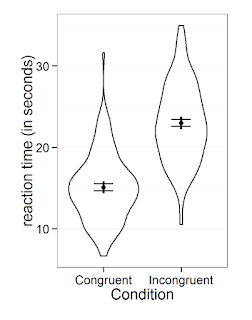 Similarly, the Bayes Factor is classified into anecdotal, moderate, strong, very strong, and decisive evidence for the alternative or null hypothesis, following Jeffreys (1961), even though researchers are reminded that default interpretations of the strength of the evidence should not distract from the fact that strength of evidence is a continuous function of the Bayes Factor. We can expect researchers will rely less on default interpretations, the more acquainted they become with these statistics, but for novices some help in interpreting effect sizes and Bayes Factors will guide their interpretation.


R Markdown scripts provide a way to create fully reproducible reports from data files. The script combines the commands to perform all statistical analyses with the written sections of the final output. Calculated statistics and graphs are inserted into the written report at specified locations. After installing the required packages, preparing the data, and specifying some variables in the Markdown document, the report can be generated (and thus, the analysis procedure can be performed) with a single mouse-click (scroll down for an example of the output).

The R Markdown script and the ReadMe file contain detailed instructions on how to run the script, and how to install required packages, including the PoweR package (Micheaux & Tran, 2014) to perform the normality tests, HLMdiag to create the Q-Q plots (Loy & Hofmann, 2014). ggplot2 for all plots (Wickham, 2009), car (Fox & Weisberg, 2011) to perform Levene's test, MBESS (Kelley, 2007) to calculate effect sizes and their confidence intervals, WRS for the robust statistics (Wilcox & Schönbrodt, 2015), BootsES to calculate a robust effect size for the independent t-test (Kirby & Gerlanc, 2013), BayesFactor for the bayes factor (Morey & Rouder, 2015), and BEST (Kruschke & Meredith, 2014) to calculate the Bayesian highest density interval.

The data file (which should be stored in the same folder that contains the R markdown script) needs to be tab delimited with a header at the top of the file (which can easily be created from SPSS by saving data through the 'save as' menu and selecting 'save as type: Tab delimited (*.dat)', or in Excel by saving the data as ‘Text (Tab delimited) (.txt)’. For the independent t-test the data file needs to contain at least two columns (one specifying the independent variable, and one specifying the dependent variable, and for the dependent t-test the data file needs to contain three columns, one subject identifier column, and two columns for the two dependent variables. The script for dependent t-tests allows you to select a subgroup for the analysis, as long as the data file contains an additional grouping variable (see the demo data). The data files can contain irrelevant data, which will be ignored by the script. Finally, researchers need to specify the names (or headers) of the independent and dependent variables, as well as grouping variables. Finally, there are some default settings researchers can change, such as the sidedness of the test, the alpha level, the percentage for the confidence intervals, and the scalar on the prior for the Bayes Factor.

The script can be used to create either a word document or a html document. The researchers can easily interpret all the assumption checks, look at the data for possible outliers, and (after minor adaptations) copy-paste the result sections into their article.

The statistical results the script generates has been compared against the results provided by SPSS, JASP, ESCI, online Bayes Factor calculators, and BEST online. Minor variations in the HDI calculation between BEST online and this script are possible depending on the burn-in samples and number of samples, and for huge t-values there are minor variations between JASP and the latest version of the Bayes Factor package used in this script. This program is distributed in the hope that it will be useful, but without any warranty. If you find an error, please contact me at D.Lakens@tue.nl.


Statistical software is built around individual statistical tests, while researchers perform a set of procedures. Although it is not possible to create standardized procedures for all statistical analyses, most, if not all, of the steps researchers have to go through when they want to report correlations, regression analyses, ANOVA’s, and meta-analyses are sufficiently structured. These tests make up a large portion of analyses reported in journal articles. Demonstrating this, David Kenny has created R scripts that will perform and report mediation and moderator analyses. Felix Schönbrodt has created a Shiny app that performs several meta-analytic techniques. Making statistical innovations more accessible has a high potential to substantially improve the quality of the statistical tests researchers perform and report. Statisticians who take the application of generated knowledge seriously should try to experiment with the best way to get researchers to use state-of-the-art techniques. R markdown scripts are an excellent method to combine statistical analyses and a written report in free software. Shiny apps might make these analyses even more accessible, because they no longer require users to install R and R packages.

Despite the name of this script, there is probably not such a thing as a ‘perfect’ report of a statistical test. Researchers might prefer to report standard errors instead of standard deviations, perform additional checks for normality, different Bayesian or robust statistics, or change the figures. The benefit of markdown scripts with a GNU license stored on GitHub is that they can be forked (copied to a new repository) where researchers are free to remove, add, or change sections of the script to create their own ideal test. After some time, a number of such scripts may be created, allowing researchers to choose an analysis procedure that most closely matches their desires. Alternatively, researchers can post feature requests or errors that can be incorporated in future versions of this script.

It is important that researchers attempt to draw the best possible statistical inferences from their data. As a science, we need to seriously consider the most efficient way to accomplish this. Time is scarce, and scientists need to master many skills in addition to statistics. I believe that some of the problems in adopting new statistical procedures discussed by Sharpe (2013) such as lack of time, lack of awareness, lack of education, and lack of easy to use software can be overcome by scripts that combine traditional and more novel statistics, are easy to use, and provide a brief explanation of what is calculated while linking to the relevant literature. This approach might be a small step towards a better understanding of statistics for individual researchers, but a large step towards better reporting practices.